Charterhouse is a grade I listed 14th Century Carthusian Monastery, one of only nine ever built in Britain. The Carthusian order was a silent order. Sadly it suffered at the time of the Dissolution of the Monasteries when the Chapel and other religious buildings were destroyed and used as building materials.

Priory House and the remains of the inner precinct wall remain today.

Charterhouse would have been home and place of worship to a Prior, twelve monks and several lay brothers. Built between 1381 and 1410, with its foundation stone laid by Richard II in 1385, it was the sixth of nine Carthusian Monasteries built in Britain.

Through the 15th and 16th Century it had numerous Royal benefactors including Richard II, Henry VI and Henry VII.

At the time of its foundation the Charterhouse precinct was 5.6 hectares surrounded by a precinct wall. In the centre, within the inner precinct there would have been a Grand Cloister surrounded by 12 monk cells/cottages on three sides and the Church on the fourth.

Each monk’s cell was two stories high with separate spaces for worship, studying, sleeping and eating. The monks would have conducted solitary prayer, contemplation and writing in these cells and would have entered the church only three times a day for mass.

The majority of the religious buildings were demolished in 1539 and the remains sold into Private ownership. In the 1560s the Prior House was bought by Robert Dudley, Earl of Leicester (Queen Elizabeth I’s favourite) who lived nearby in Kenilworth Castle (link to Kenilworth Castle website).

Dudley converted the remains into a house by adding a second floor and used it to house Elizabeth’s courtiers on her extensive stays at Kenilworth Castle. It was at this time that additional murals were added in upstairs rooms.

In the 1700s the estate was leased by John Whittingham and used as one of the leading garden nurseries of the age, growing oranges for Warwick Castle and other stately homes.

Whittingham’s diaries survive and are a fantastic insight into both the day to day events of the time.

What are Historic Coventry Trust creating?

Historic Coventry Trust will rebuild two cells using the existing archaeological outlines. One will be a cell as it was at the time of the Dissolution and the other will be a modern equivalent, where it will be possible to experience absolute silence.

The three wall murals will undergo further work to protect them and innovative virtual effects will be used to provide further insight to visitors of what they would have looked like in their original condition.

A further phase of works will restore of the former Coach House and Stables to create a wedding and conference venue.

How to find us: 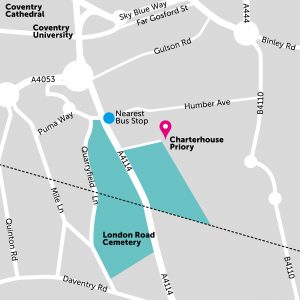